So, Mike got home today  from Emory, headed for the living room, and picked up his book. Jackson jumped up on his lap, and they both promptly fell asleep. Mike just woke up, and he is still a little groggy. He didn’t sleep well again last night. He started in with another rash a few days ago, and it is spreading and has started to sting and itch, especially at night. His doctor once again put a hold on the Revlimid, but they gave him the rest of his medication. One of the meds was dexamethasone, which might knock out the rash. Let’s hope so. I keep telling Mike that he has to expect things like this, and he realizes it and isn’t complaining. He is grateful that he has had no nausea, and no more serious complications of chemo so far.

If Mike is vulnerable to any side effects it would be a rash. As an infant and up to age 22 he had severe atopic dermatitis (eczema). He itched constantly, and scratched himself bloody every night. He would wake up with blood under his fingernails, and on his pajamas and bed linens. When he was little his father tried to splint his arms so he couldn’t bend his elbows to scratch himself. This was not effective. I may have mentioned previously that when he was in college a doctor told him to put Vaseline on the rash. He used to walk around campus with his face excoriated and glistening. It was pretty grim. After a year or two he finally figured out that the Vaseline was making his rash worse, so he stopped using it. He was accepted to medical school for the incoming class of 1963, and during the previous winter break went to the student health service there for his physical exam, as part of the admission process. The doctor (Dr. Ziolkowski, God bless him) there sent him to the dermatology clinic, where they put him on a short course of steroids (methylprednisolone), and within 1 week his skin was 90% improved. Mike couldn’t believe it. On the one hand, he was thrilled and immensely grateful, and on the other hand, he realized that he could have had relief years ago and it was never offered to him. The reality of the situation is that there are all kinds of potential complications with steroids, and the benefit didn’t last very long. Well before he started medical school he was back to his baseline rash. Eventually, he went back to the dermatology clinic where they refused to order the medication, saying it was too risky. So Mike went back to the student health service and saw Dr. Ziolkowski again. He agreed to treat him. The steroids never did work quite as well as the first time, and the benefit was very short lived. One month Mike held off on starting his medication because he thought he might have been exposed to a virus. (Steroids can impair the immune response.) Within a couple of weeks his rash began to fade, and it has never returned. That was 54 years ago. However, even though there was no rash, Mike has continued to itch constantly. He says it is a big joke that God has played on him. So, it is not surprising that he would break out in a rash from chemo. This is the 3rd time already. He has some schmear to put on it. Let’s hope he will sleep better tonight. And, oh, you should see how short he keeps his fingernails trimmed.

At the top of this page is a picture of Mike and his friend, Jack Kramer. I mentioned that Jack and his wife, Pamela, were coming for a visit this past weekend in my most recent post (A New Low in Demagoguery, July 19, 2019) . There is nothing like old friends. They had a wonderful visit, talking about old times. They reminisced about their parents. The Kramers were very loving people who took many people into their home who had no other place to go. This was often at great expense to them, both materially and emotionally. Jack and Pamela have done the same. Jack’s father died of a broken heart, 1 month after the Cubs blew the 1984 pennant. They had the best record in the National League, and played San Diego for the pennant (At that time there were only 2 divisions per league.) The Cubs won the first 2 games of a 5 game series, and then lost the next 2. In the fifth and final game they lost it when Leon Durham pulled a Bill Buckner, and let a ground ball go between his legs into right field. To be more accurate, this happened to the Cubs first, so it was Bill Buckner who pulled a Leon Durham. It was all very unfortunate. After Buckner’s error, his name was forever associated with that play, despite his otherwise excellent career. He passed away recently, and of course, the notice on the sports page had to make mention of the infamous play. I wonder if Mike’s obituary will make mention of him always scratching himself. I hope not. But back to Arnie Kramer; he did have a weak heart, and I guess the strain of the Cubs collapse, and the manner in which they collapsed. was just too much for him. Let’s hope that wherever he is now the Cubs are perpetual World Series champions.

It was 2 years later that Mike’s father passed away. He had end-stage Parkinson’s disease with a very poor quality of life. At the very end he had a lymph node pop up in his neck that was biopsied positive for lymphoma. I think I have mentioned this before. I believe God sent the lymphoma to end his misery. He died 12 days after the node was found. Arnie Kramer and Moe Gordon were both lovely men, and they are still missed and remembered fondly.

Back to the present, this is what Mike saw when he awakened from his slumbers this afternoon. 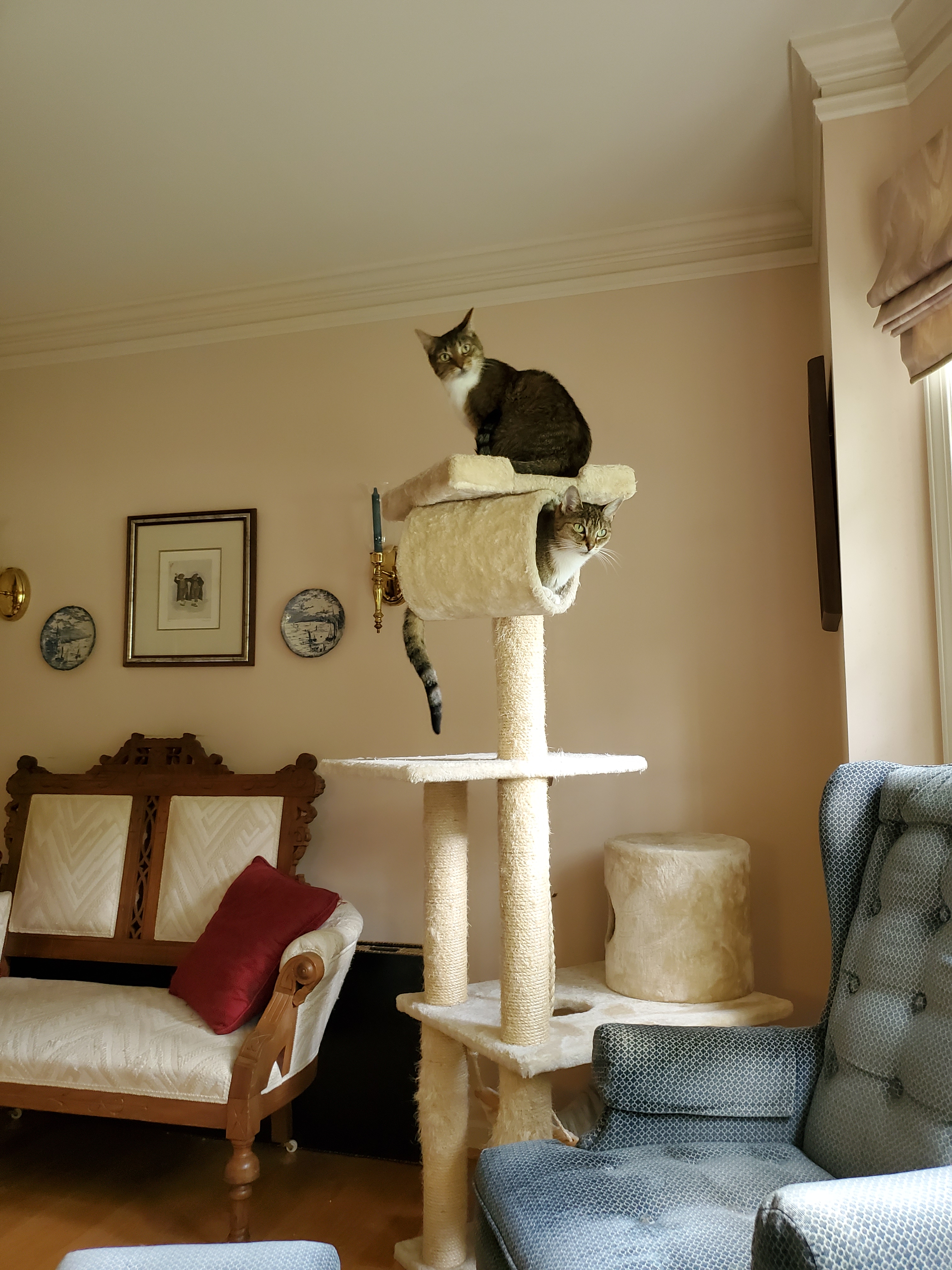 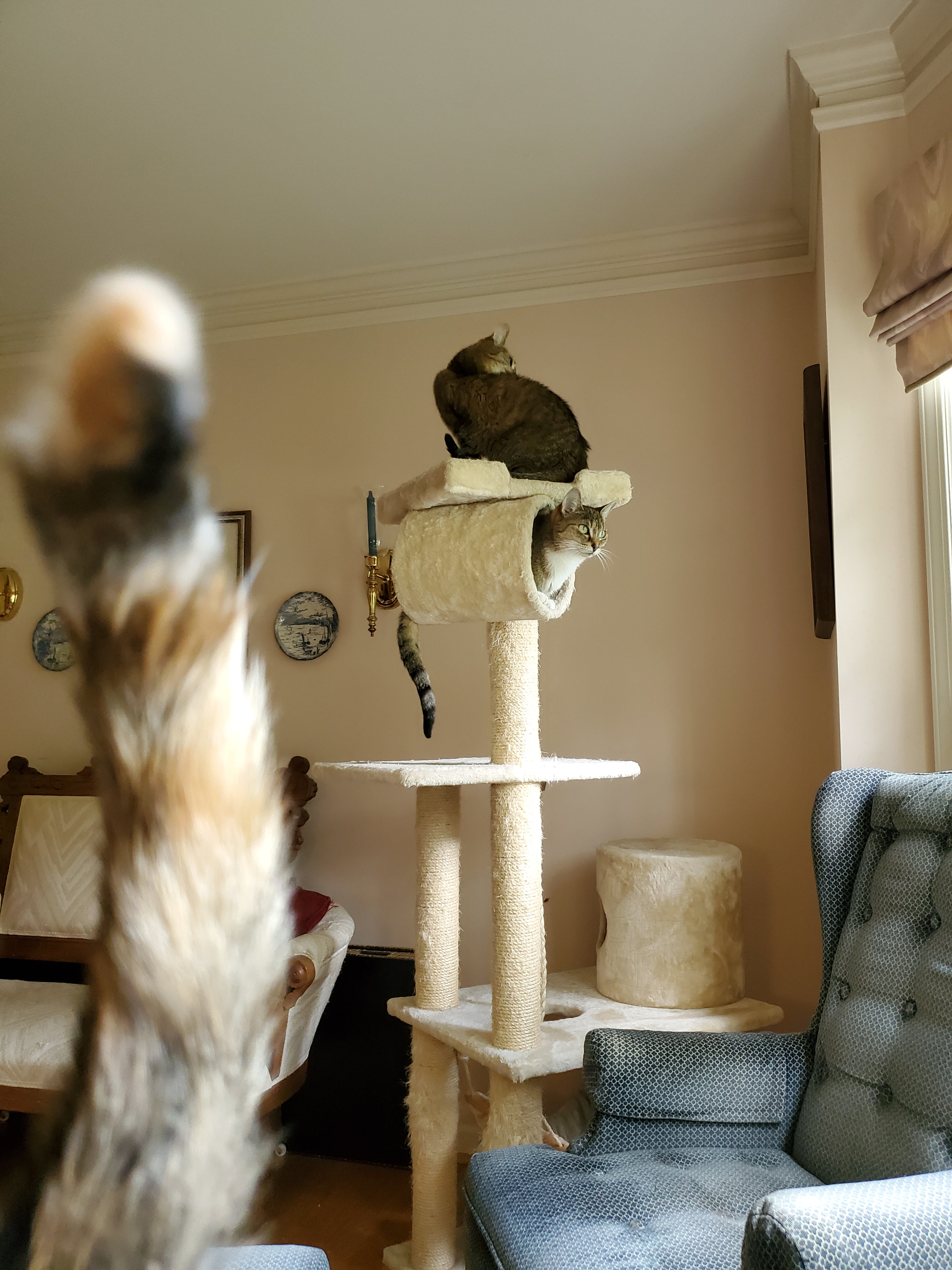 So, that’s all the news for now from Happy Meadows. I don’t want you to get the wrong idea. Mike is doing and feeling very well. I hope you are all doing smashingly as well. Until next time, be safe, be well, and enjoy your blessings.

3 thoughts on “Itching and Scratching”