So, regrettably, my blog site was down from July 3 through the 19th. It took Mike a while to realize it because he was away on vacation and not checking up on it as he should have been. Once home, he managed to not check on it for several more days. Once he realized there was a problem, he contacted the Word Press folks who quickly intervened on my behalf, God bless them. I hope you all missed me. I certainly missed you.

The July 11 issue of The Citizen, the local paper in Fayette County, had a lead front page story with the following headline:  “Attack of Peachtree City Deer without Fear” Underneath this bold assertion, in a smaller font it read: “One dog killed, others trampled in multiple deer attacks; some residents worry about safety of their small children”. What is this world coming to? Docile Bambi has gone all Rambo on us. I don’t know where Peachtree City is. I’m sure it is not anywhere near Happy Meadows. All our deer here are peaceful although on the nervous side. I suppose does with fawns were feeling threatened by yappy little dogs who were just being their little doggy selves. It’s not as though people were letting their dogs out on the loose. Most of the attacks occurred in the people’s (and dog’s) back yards. The world gets curiouser and curiouser. Mike says that the greatest threat to life as we know it is overpopulation. I guess this applies to deer and dogs as well. By the way, do the Peachtree City folks really think the deer are going to attack their small children? Give me a break. Also by the way, I heard that Peachtree City is a community in which people get around in golf carts. The kids even drive them to school, I think.  Maybe they can run down a few deer on their way, lol. By the way, I have a bone to pick with people who say something nasty  in a text or post, like I just did, and then append, lol. If you want to be nasty just be nasty. Don’t pretend that you don’t mean what you said.  That said, I really don’t think school children should run down deer with their golf carts.

By the way, speaking of curiosities, Mike says when he moved to Atlanta in 1984 there were 35-40 streets that included the name “Peachtree.” This led to a certain amount of unnecessary confusion. According to a recent check with Ask.com, there are now 71 such streets. What kind of sense does this make? There is also every kind of Peachtree business you can imagine: Peachtree Cleaners, Peachtree Audiology, Peachtree Electrical, etc., etc. Mike missed a great opportunity when he failed to call his Addiction Medicine practice Peachtree Addictionology. I guess he still could, unless someone beats him to it.

And it’s not just deer and dogs. We have ants in the kitchen. Little ones that are hard to discourage. And we have frogs. A couple of years ago a frog (or maybe it was a toad) took up residence in a planter we have on the back deck. Judy named him Gerald. Gerald disappeared for a few days, and then Michelle discovered him under the toilet seat in our downstairs bathroom. He wouldn’t say how he got in the house. We have other frogs that sing at night. They fill the air with lovesong, very charming and pleasant. By our front door we have lights on either side of the stoop. Most nights one or more frogs hold on to the side of the house under one of the lights, their little throats pulsating rapidly,  helping themselves to the bug buffet. 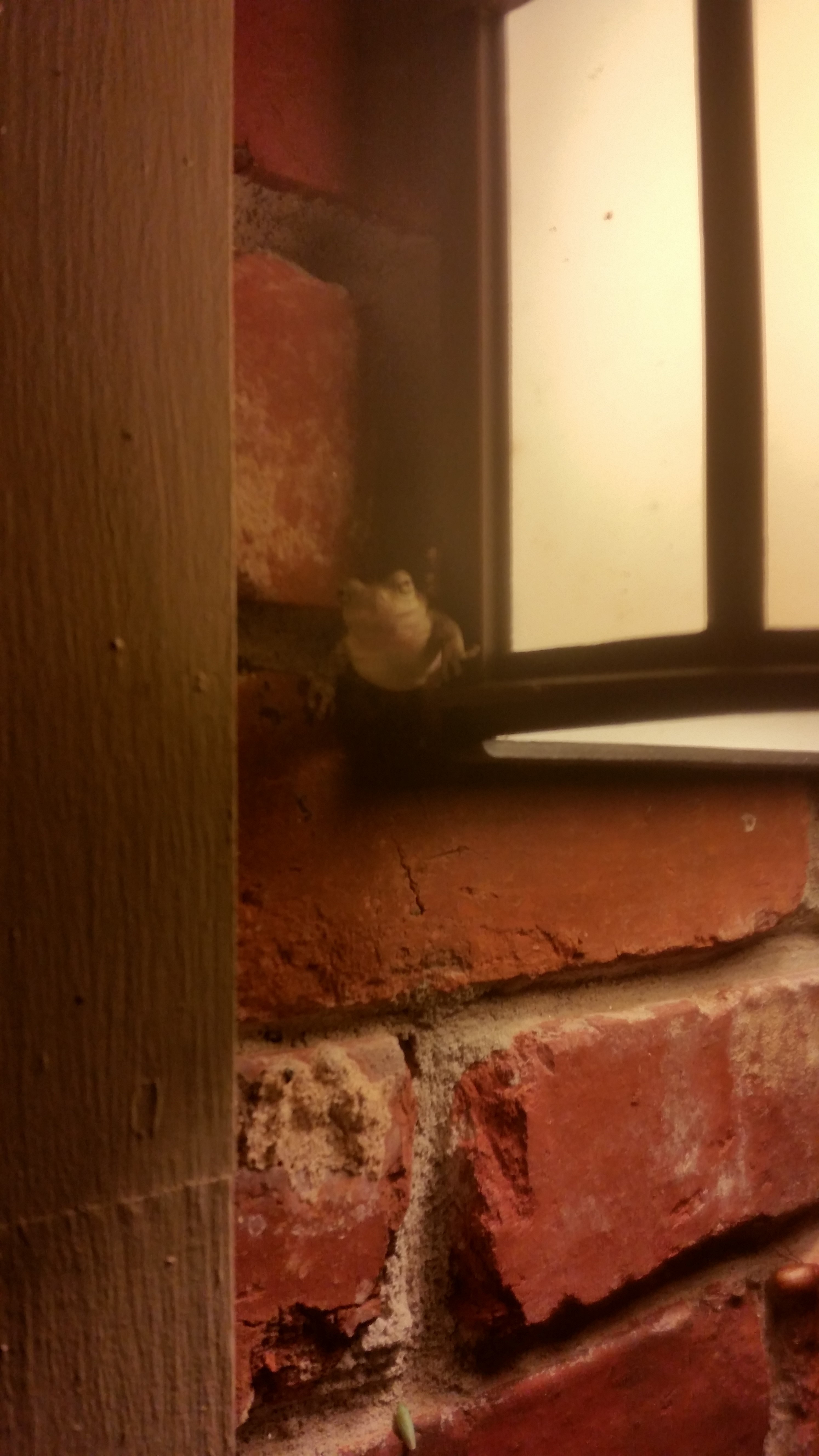 Not the best picture, but you get the idea. Mike took a few more but can’t figure out how to add them to my blog. We are lucky to have this one to show you.

Yesterday we got an email from the Marietta police that they are well-aware that a small black bear has been seen cavorting around West Side School, and please stop calling them to report it. For one thing, the bear hasn’t broken any laws that they know of. For another thing, they are on it. Remarkably, that can’t be more than 3 miles from here, probably less. I hope the bear comes to visit Happy Meadows. I have never met a real bear.

But, the biggest story of wildlife invading suburbia involves Rocky Raccoon. Not the one who checked into a local saloon only to find Gideon’s Bible. This is the one who is living in Michelle’s attic. People think raccoons are adorable. They have a bandit’s mask which gives them a roguish appearance. They don’t mind coming up to people’s houses, sometimes mama raccoon with her kits, and people feed them because they are so damn cute. But not so fast, my friend! Raccoon’s  lack of fear of humans make them inherently dangerous.They think nothing of approaching a human dwelling, climbing up the side, and finding shelter, breaking in by clawing their way through a window, soffit,  or old siding. They have been known to climb down chimneys to get into a house, and once in they can tear the place up looking for food. And they carry disease. Almost 40% of all documented rabies cases in the USA have involved raccoons. Fortunately for everybody except the one person who died from rabies after a raccoon attack, seldom has the disease been transmitted from raccoons to humans. They also carry other exotic diseases including leptospirosis, distemper, listeriosis, tularemia, and trichinosis. Raccoons tend to eliminate in a single area, called a raccoon latrine, rather than spread the wealth  around. Thus their feces can be concentrated in closed areas, including attic spaces. An attempt by a person to enter such a space and clean it out can expose him or her to a high concentration of pathogens including giardia and  the larvae of roundworms. Leave the extermination of raccoons to the professionals, is my advice. Full disclosure requires me to say that the picture below is not of Michelle’s house. The raccoon in the photo is the Wisconsin cousin of Michelle’s raccoon. Finally, as I was out this morning I saw another cousin running across the street in front of our neighbor’s house. She was carrying some thing in her mouth, something dead I am quite sure. 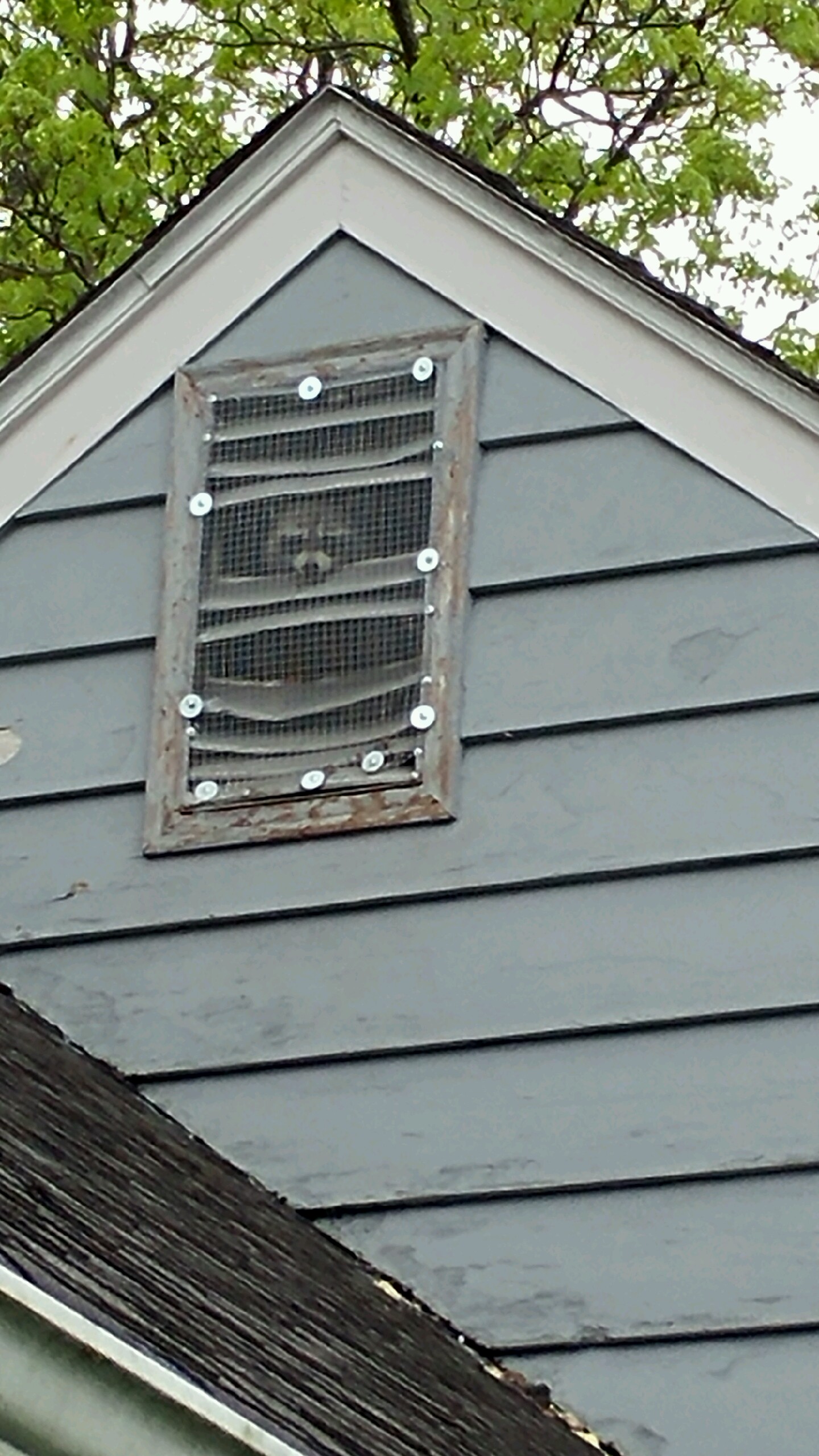 Well, that’s all the news for now. I am so happy to be back and share the Happy Meadows goings on with you. Be well, and enjoy what’s left of your summer.