So, here we are again. Mike and Judy took off for a few days to the mountains of North Carolina, leaving me and the other cats in the care of Michelle. She’s a great Big Sister, and a super good sport, as she is allergic to cats. I guess they had a relaxing time while away. It was the first vacation they have taken since 2018. Between Mike’s chemo, and the COVID mess, normal life has been on hold. We are hoping for a prolonged stretch of normal.

I may have mentioned that Mike has taken advantage of his enforced isolation by working on a book. He has made good progress, and is moving into a new stage, that of trying to get it published. Getting a book published by a traditional publisher is challenging. When Mike wrote his first book, Autobiography of a Georgia Cat, he talked with a lady who had been in the business. She told him the it was almost impossible to get a book published without an agent—and that it was even harder to get an agent. This proved to be the case, and Mike eventually went the self-publishing route. Since that time (1999) much has changed, most especially the world of social media. Mike has learned that in order to get published an author has to have already established a reputation and a following. He has to build what is referred to a a platform. This involves building a social media presence. At a minimum this must include activity on Facebook, Twitter, and other sites, and an author’s blog. Mike has not only committed to establish a platform, but also to not complain about it. He is already on Facebook and Linked-in, and just opened a Twitter account. He has contacted a publicist to assist him with navigating the journey through the blogosphere, twittersphere, etc. All of which is leading up to saying that he will start a new blog that will be written by him, not by me. He has promised me that he will continue to help me with my blog. Once the new blog is up I will give you all the details and put up a link to it from my blog. I promised to give Mike all the support that I can.

So, the world is still a crazy place, but we need to make the best of it as it is the only world we get to live in. And don’t forget, Cats Rule and Dogs Drool! Until next time, be safe, be well, give someone a hug, and pray for peace.

So, Mike had a meeting with Dr. B., his lymphoma oncologist. She said his recent scan looked good (no evidence of recurrence), and that she wants another scan in 6 months. In his most recent meeting with Dr. K., his multiple myeloma oncologist, he also received a report of no evidence of recurrence. Mike gets periodic blood tests to follow this, and will have another bone marrow biopsy in December. So, this is great news. Even better, Mike feels fine and is enjoying his life. We hope you all are as well.

Happy day after Mother’s Day to everyone. Mike and Judy went out with Michelle to celebrate Judy and her place in our little family. I include a picture from the event. Are they not adorable? 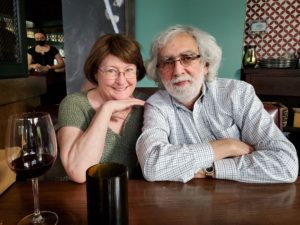 Mike continues to work on his book, and feels as though he is making good progress. I will keep you posted.

Life gradually moves back towards normal. Don’t think, however, that things will return entirely to the way they were pre-COVID. That cannot and will not happen. Most industries have been affected by the pandemic. As one example, the health care industry is down over 500,000 jobs since February of 2020. A great many people have either died or contracted chronic illness from COVID. It will be interesting to see what a post-COVID world looks like. I hope you all will make a positive adjustment. Mike always talks about the importance of learning to deal with both uncertainty and change as critical life skills. Good luck to all of you with the new world.

And speaking of the new world, the sides are lining up and gathering ammunition to face each other in what Mike thinks will be the Great Battle of the next 20 years or longer. On the one side we have the people who want justice and equality for all people, and the other side we have the people who want to maintain the status quo, white privilege. Mike says it has become clear that the real danger to our nation comes from within, outside threats (China, Russia, cyberthreats, and viruses) notwithstanding. I have held forth before in this blog how, as a black cat, I am sensitive to mindless prejudice and discrimination based on differences in race, social status, color, national origin, gender or sexual orientation, etc.  I expect that our country will become a much better version of itself in due time. It will take determination, hard work, fearlessness, cooperation, and prayer, all readily available commodities. Let’s do it! 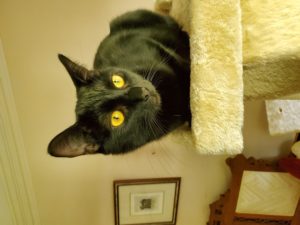 If you check your Encyclopedia of Cats you will find that he strongly resembles a Bombay cat. All of us are rescues, and none of us are pure-bred cats. I can’t say that being a mixed-breed cat is preferable because that would be saying that cats of a certain origin are better than cats of other origins.  This is not any more true than saying that people of one origin are better than people of other origins.  And I doubt if there is a person in the world that isn’t racially mixed in some way. People still carry Neanderthal genes, for heaven’s sake. As the line from the spiritual song goes, “We’re in the same boat brother, we’re in the same boat brother; and if you shake one end you gonna rock the other, we’re in the same boat brother.”

Well, it’s time for lunch and a nap. I hope you are all doing very well. Let’s all love one another, right now. I know, a line from another song. I can’t seem to help myself. Unlike most cats, I have learned to appreciate music and poetry. I will talk to you soon.