So, Mike has been reading up a storm, and has been neglecting his duties as my blogging assistant. One of his recent books was “White Rage” by Carol Anderson, the chair of African-American Studies at Emory University in Atlanta. In the book she wrote about the Black Codes which were enacted by the legislatures of 10 of the 11 Southern states that had seceded from the USA. Strangely, nobody Mike has asked had learned about this in their high school American History classes. Or maybe not so strangely. These codes succeeded in depriving blacks, whether former slaves or not, of basic human rights. President Andrew Johnson, who succeeded President Abraham Lincoln after the assassination, was from Tennessee, a former slave state. He saw equal rights for blacks as a disaster for whites and was quoted as saying, “This is…..a country for white men, and by God, as long as I am President, it shall be a government for white men.” Likewise, the provisional governor of South Carolina said at their constitutional convention, “This is a white man’s government.” The Black Codes enacted, first in Mississippi, and then throughout the South, severely limited the freedom and rights of blacks. A great many blacks stayed on the plantations doing the same farm work they had always been made to do. Blacks who worked in towns were required to sign a labor “contract” with an employer which denied their right to seek better employment elsewhere for a year. If a man left his employment, for whatever reason, he was subject to arrest and return to his “master.” Most contracts required the worker to reside on the employer’s property, work sun-up to sundown 6 days per week, and not leave the property or receive visitors without permission. Wages were low and non-negotiable. Employers were authorized to whip their “employees” under age 18, but needed a judge’s order to whip older servants. An inducement to sign these contracts was the risk of being arrested for “vagrancy.” Anyone arrested for vagrancy could be put to hard labor and fined. A prisoner could be “hired out” at a public auction to an employer as a bondsman to work off the fine, often an impossibility. Vagrancy was a broad category which included being unemployed, loitering, frequenting brothels or drinking parlors, being disrespectful to a white man by word or gesture, or basically, by being black in public. Blacks were prohibited from fishing or hunting, owning knives or firearms, or to testify against a white man in a court of law. And so on and so forth….. just slavery by another name.

First appearing in North America, Black Codes were promulgated in 1685 for all the French Colonies by King Louis XIV, and issued almost unchanged in 1724 as the Louisiana Code Noir. Interestingly, the very first article in both codes says that Jews may not reside in the colony(s). (European countries and principalities, in particular, have a long history of kicking Jews out, and then, eventually, letting them back in again. Rarely, though, did Jews have the same rights as their Christian brethren until modern times.) Some choice items from the 54 articles of the Code Noir of 1685: Slaves must be baptized in the Roman Catholic Church; slaves belonging to different masters may not gather together under any circumstances; a slave who strikes his master or a member of the master’s family will be executed; fugitive slaves who have been absent for one month shall have their ears cut off and be branded; if they are absent for an additional month (or presumably, run away again) one of their hamstrings will be cut and they will be branded again; for a third offence the punishment is execution; masters who kill a slave will pay a fine; masters must provide food and clothing for their slaves even if they are old or sick; and so on and so forth.

Mike thinks that it reprehensible that the law is used as the underpinning of such horrors. What is worse is the complicity of religious agencies in this outrage. Mike thinks it is ironic that Cobb County, where we live in Georgia, is named for the author of a greater than 600 page treatise on slavery law. Thomas W. Cobb served as a member of the United States House of Representatives, then as a US Senator, and finally as a Superior Court Judge. Our city, Marietta, is thought to be named for his wife, Mary Cobb. So, the mistreatment of blacks, Jews, Indians, and other minorities in our country and elsewhere has a long and dreadful history. Mike thinks we can expect the struggle to continue with minorities demanding their full human rights, while others will try just as hard to deny them. A friend of Mike’s once defined politics as competition for limited resources. It’s more than that, but the point is a good one.

Some progress is being made in the sports world. Erik Moses has been named president of the Nashville Superspeedway,  a venue owned by Dover Motorsports. He is the first black man to hold the position of president at any NASCAR track. His previous job was as president of the XFL’s DC Defenders. And Jason Wright was named as the president of the Washington Football Team (formerly known as the Washington Redskins.) He is the fourth former player and first black man to serve as an NFL team president. Wright played for the Atlanta Falcons, Cleveland Browns, and the Arizona Cardinals, and while a player served as the union representative for the Cardinals. He holds an MBA from the University of Chicago. Congratulations to both men. And condolences to the Caray family and everyone connected with the Atlanta Braves on the passing of Paula Caray, wife of the late Skip Caray, the legendary announcer who died in 2008.

In other milestones, we have just marked 100 years since women gained the right to vote in the USA. Mike thinks it’s amazing that at the time that he was born women had only had the vote for 23 years. It seems so right and natural that women should vote. The greater the participation of everyone in our democracy, the better it will be for everyone. And, I’m just saying, on another important topic, Black Cat Appreciation Day has just come and gone on August 17; and International Cat Day (World Cat Day) was August 8. National Black Cat Day will be on October 27, just in time for Halloween. I’m not making this up, and I admit it seems like a bunch of silliness. Cats deserve to be esteemed every day, especially black cats. And speaking of black cats, here is another picture of Magi, although he is much bigger now. 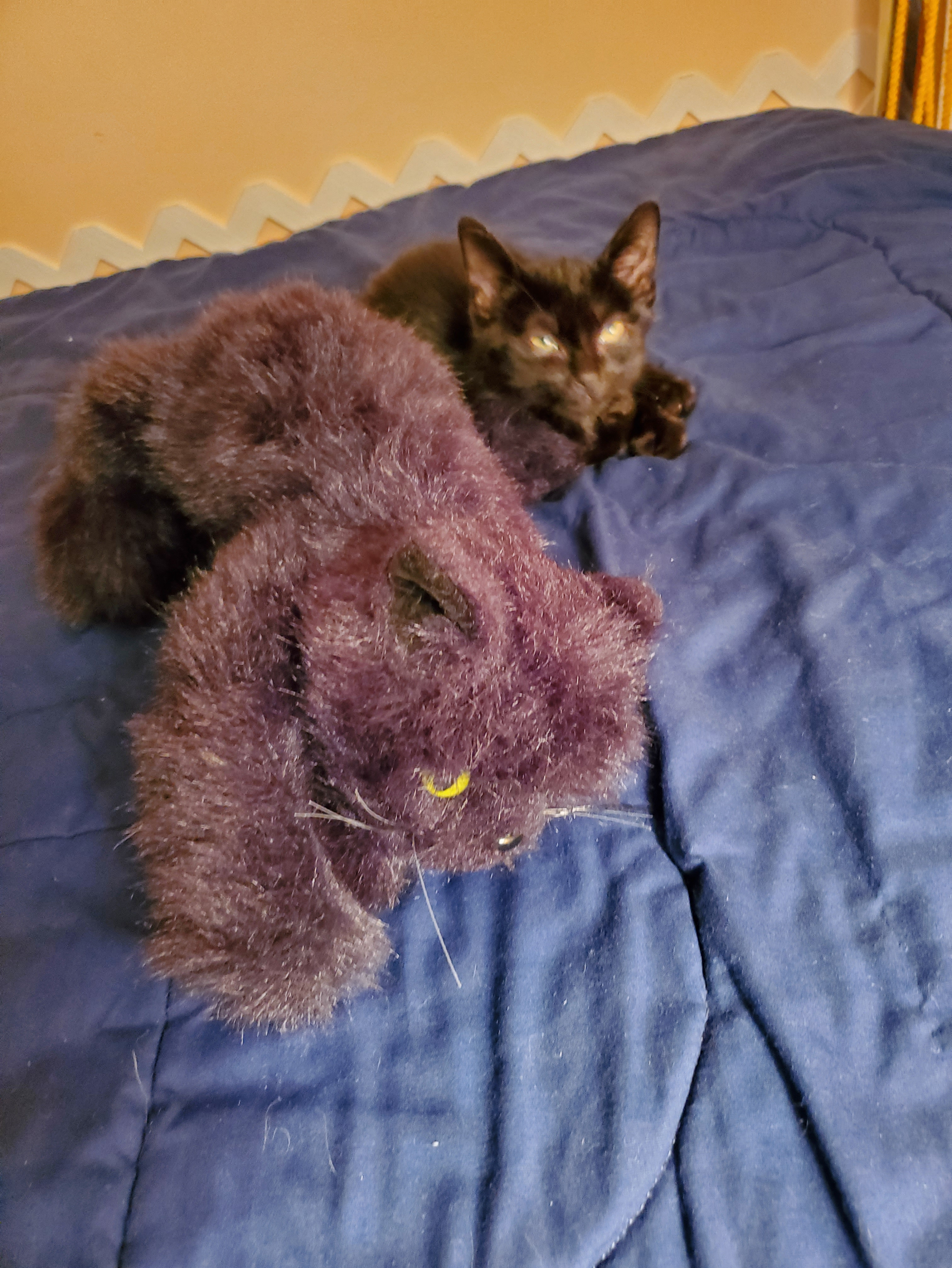 Magi is growing like a weed. He weighs almost 5 pounds. We had him to the vet for his shots last week, and he is good to go for a year. What a great little guy!

So, we had a little excitement over the weekend. Mike decided to have a couple of trees removed. One was hanging over the garage roof, and another one in front was hanging over our neighbor’s driveway and aiming at his house. Here is a picture of the worker up in the tree: 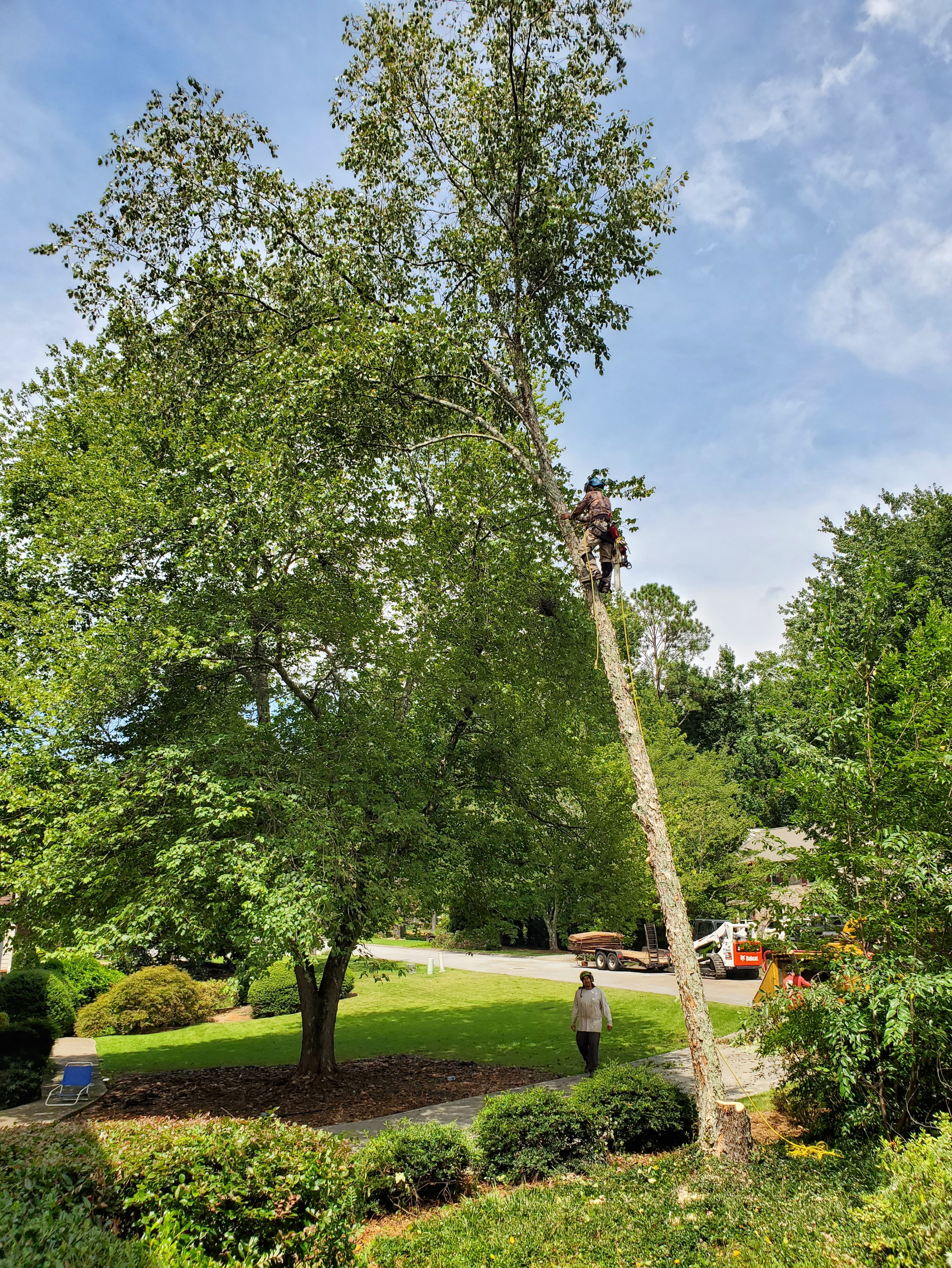 This was a river birch that Mike had planted when they moved in 36 years ago. I think you can see where they already removed one trunk. This is what it looked like after the tree was cut down: 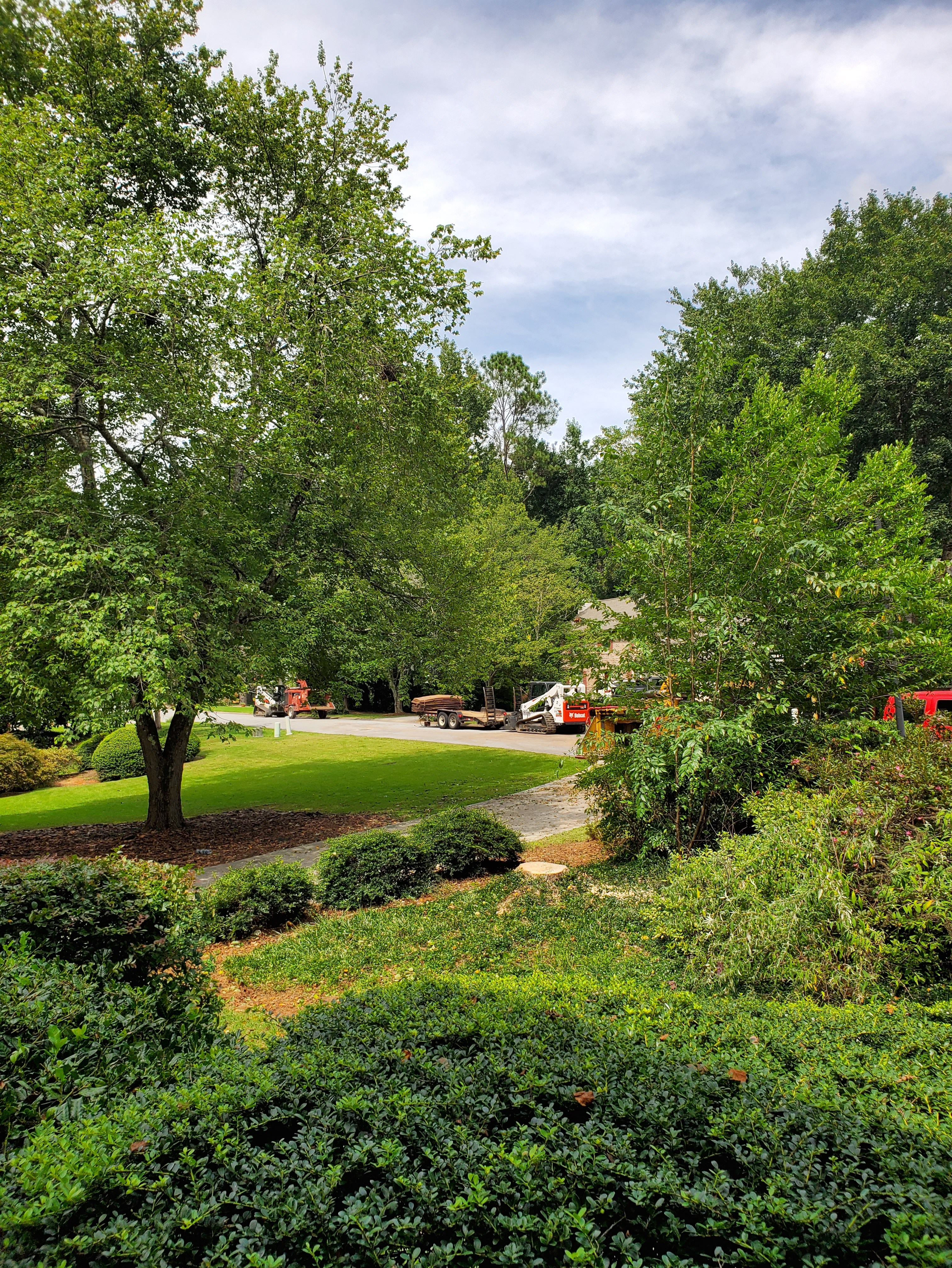 Judy has wanted a pink dogwood, and now we have a nice spot for it. We will probably wait until spring to plant it. There might be room for two dogwoods.

A friend of Mike’s just called. He is sober 3 years today, a wonderful thing, and a cause for grateful celebration. I hope all of you have good things in your lives to celebrate as well. We are all certainly dealing with enough difficulties at this time; but things will improve. We even had a Zoom crash today, probably due to the increased use due to the start of school around the country.

Well, by all means stay healthy. Pray for world peace, be kind to everyone, wash your hands, and mask up. The more diligent we are about public health measures the sooner this mess will be over, and we will save lives. We have passed 5,000 deaths in Georgia, 175,000 nationally, and would like to put the brakes on. We love you all, and until next time, so long from Happy Meadows.

One thought on “The Black Codes”