So, I have learned that Mike can wonder about something for a long time before he looks into it, if he ever does. There is a tree in front of our house that bears the mark of a prior surgery to prevent a trunk from toppling over. Here are pictures. 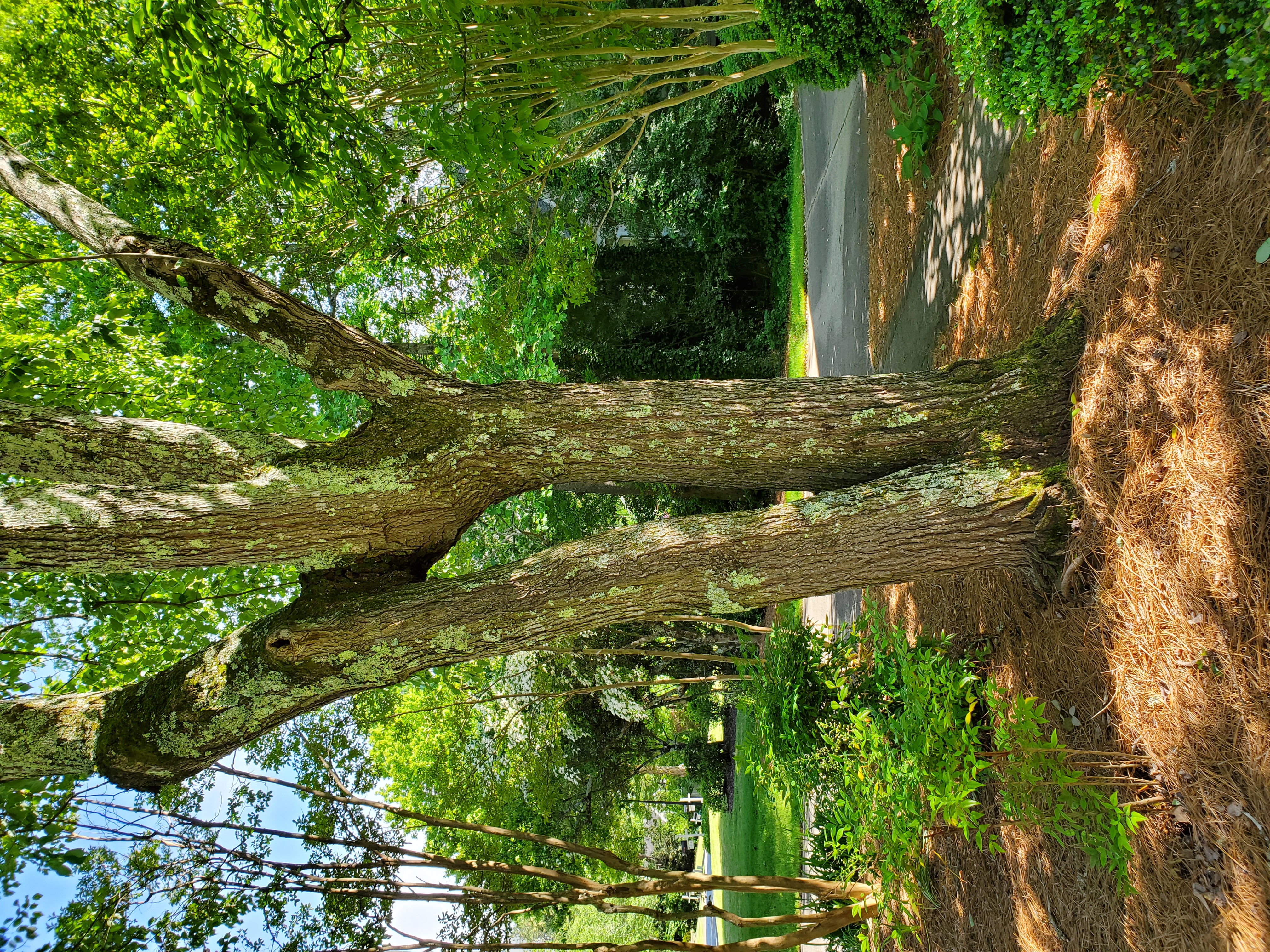 This picture shows what looks like a tree with two trunks, but could be 2 trees originating from 2 seeds that germinated in close proximity to one another. You can see the surgical result better in the next picture, taken from the opposite side. 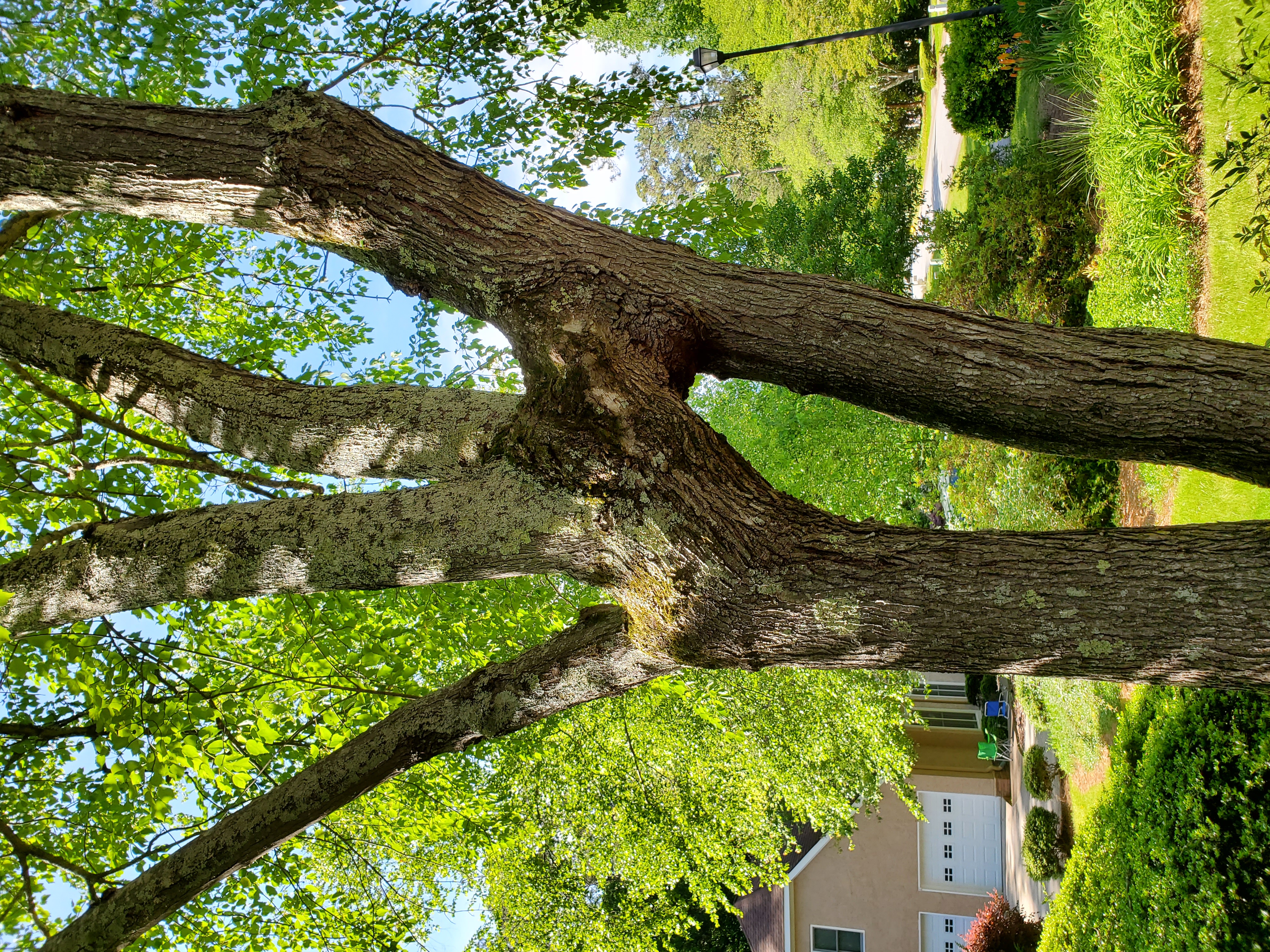 Mike has always wondered what kind of tree it is, but has never bothered to find out. I suppose being confined to quarters, so to speak, he has looked at the house and yard more closely, and has had way more time to do so. Another thing Mike has wondered about is the tree by the deck behind the house, specifically, what kind of tree it is. Not very long ago he made the startling observation that they are both the same kind of tree. You might wonder how a person could live in a house for over 35 years without noticing something like that. But, the discovery stimulated Mike to action, and within no time it was determined that they are both red maple trees. What is strange about this, among many other things, is that Mike always thought the tree in front was some kind of maple, and he never once considered the possibility that the tree in the back might be a maple. I don’t know about you, Mike!

Baseball is back, in Korea, sans fans, with a major rule change. Because of the coronavirus epidemic, spitting is no longer allowed. Talk about unintended consequences! In yesterday’s paper Steve Hummer had an informative and entertaining article about baseball and spitting. One day, and maybe soon, people will wonder with horror about how such disgusting behavior could be considered tolerable. Indeed, some people have been aghast about this forever. But spitting is so common as to be part of the game. Of course, it has its origins in the use of chewing tobacco by baseball players. Mike has several recollections of spitting or other tobacco related events in his life. He went to a baseball game in Milwaukee in 1983, the year before he moved to Georgia. At that time Harvey Kuehn was the Milwaukee manager. Mike used to bring binoculars to games, and he recalls scanning the Milwaukee dugout just at the time that Kuehn was letting go of a thick brown rope of saliva that reached from his mouth almost all the way to the ground before it dropped. Watch your step, y’all! I should mention that tobacco is not a particularly  health-forward substance. Among other things, it causes cancer, heart disease, and arterial disease, even if it isn’t smoked. Poor Harvey Kuehn had serious health problems including diabetes and heart disease. He had to have a leg amputated because of an arterial blockage, and died several years later at age 57. I’m not saying that the chewing tobacco habit caused all of his health problems, but it certainly didn’t help. Mike recalls a 25 year old patient that he treated for alcoholism who had cancer of the tongue. He was a baseball player, and had chewed tobacco since age 14. Not good. Mike knew a priest back in Wisconsin who used to bring communion to shut-ins at their homes. Back in those days the communicants would open their mouths and stick out their tongues, rather than accept the communion wafer in their hands. Father Tom told Mike it was commonplace for the men to have a mouthful of snuff, which at least for him diminished the spirituality of the occasion. Mike also recalls one day many years ago playing golf with a man who was in the Georgia legislature. At the beginning of the round, the fellow put a big cigar in his mouth. Although he never lit it, nevertheless it got shorter and shorter as time went on. Mike says he ate the whole damn cigar, and on the back nine started in on a new one! Mike admits that he used to smoke, but quit for good in 1974.

And, speaking of things that Mike didn’t know, he found out recently that from about 1907 to 1913 Galveston, Texas was a significant port of entry to the United States for Jewish immigrants. The Jewish Benevolent Societies, particularly in London, were trying to steer Jews away from New York where there were diminishing opportunities and very crowded conditions. It is estimated that about 10,000 Jews came in at Galveston during those years. They mostly settled in the American West or Midwest. Mike’s grandparents on his father’s side came in through Ellis Island. On his mother’s side, her mother was born in America. Her father told Mike he came in with his mother and siblings through Quebec. From there they took a train to Duluth, Minnesota, where his father and his older brother and sister had already established residence. Mike isn’t sure where they entered the country. Maybe Detroit. He says he never thought to ask. His grandfather’s family was stuck in Quebec for a week because of a problem with their tickets, and slept in the train station. When Mike and Judy got married they honeymooned in Quebec, and passed through the station, I imagine the same one his grandfather had been stuck in 90 years previously. Carl Cowl used to tell a story about a man with a fruit cart who gave him a banana there. He had never seen a banana in Lithuania. Carl suffered terribly from hunger as a child. Every time he told this story Carl would tear up, thinking of the kindness of the man, and how hungry he had been. Mike also recalls that his grandfather was a speed eater. by the time everyone else at the table had just about picked up their forks, his grandfather had cleaned his plate.

So, it has been downright cold the past few days, although mostly sunny. Mike and I seem to be taking longer walks recently. I think he is getting stronger as he recovers from that bone marrow transplant. We hiked over 4 miles yesterday, a record for us. We go see his doctors the week after next, and I hope they have good news. I believe they will. I suppose there is more going on in Happy Meadows, but I can’t think of anything else right now. So, let me say adios to you all, and wish you all good health, peace of mind, and a very Happy Mother’s Day. Don’t forget to be kind to your neighbors and loved ones, and to pray for world peace. Bye, bye!