So, I continue to stress the importance of cats to the understanding that humans have of their world. I must say at the outset, that I don’t begin the comprehend the physics of what I am about to relate, and I assure you, neither does Mike. Nevertheless, let’s give it a try. The beginning of the last century saw the development of theories of quantum mechanics. This involved the existence and behavior of atomic and subatomic particles. One interesting aspect of this is the observation that at times a particle such as a photon (light particle) behaved as though it was a particle, and at other times behaved as though it was a wave. Because of the size of the particles involved there was a limit to the accuracy of observations that could be made. For example, if you wanted to look at a photon you would shine a light on it. Since the light you shine is made up of other photons of a mass equal to the photon you are trying to examine, the act of illuminating the photon would cause it to be knocked out of its original position. In 1927 professor Werner Heisenberg formulated what has come to be known as Heisenberg’s Uncertainty Principle. It states that it is not possible to know both the position and the momentum of a particle at the same instant. Heisenberg believed that this was a fundamental principle in nature, and independent of the limitations placed on the observer of the particle. Einstein disagreed, stating that there must be a more fundamental principle in reality that is not yet known.

Because of the limits of observation, according to quantum theory not only could one not know if the photon was behaving as a wave or as a particle, you could say that it existed as both a particle and a wave at the same time. Schrodinger believed this was absurd, and in 1935 devised a thought experiment to look at this phenomenon on a macro level. He imagined a closed steel box in which a cat had been placed. Also in the chamber was a source of radioactivity and a device to detect the decay of radioactive atoms. If the device detected the decay of an atom, it would trigger a hammer which would shatter a glass flask of poison, thus killing the cat (shudder.) In theory in 1 hour there was a 50% chance of the cat remaining alive, and 50% chance of it being dead. The observer would not know unless he opened the box. Schrodinger said that according to the theory of a photon being both a wave and a particle at the same time (in the absence of a measurement) then one must say that the cat must be both alive and dead at the same time. This is clearly absurd. If you are interested there is a great deal of scholarly work available on the subject, but you had better bring your math chops with you.

What really interests Mike about this is the convergence of physics and spirituality. On the surface one would think they would be so different, physics being an exact measurable science, and spirituality being unmeasurable and mysterious. It seems that the deeper one gets into physics the more mysterious it becomes. So maybe they are two different ways of looking at the same thing. Mike says there are 2 kinds of seekers that turn to religion. One kind is those who need definite answers. They tend to place complete trust and faith in their sacred texts, follow the precepts found therein, and are thus comforted in the knowledge of their salvation. The other kind is those that prefer the mystery. They believe that whatever force or energy rules in the universe, it is ultimately unknowable at our current level of existence. One can appreciate the world and its Creator from a state of awe, hope, and wonder. The mystery works better for me, and Mike is with me on that. In counseling his patients Mike often tells them that learning to deal with uncertainty is one of the great challenges we all face in life.

Not that long ago the cats here in the family got Mike a shirt for his birthday. 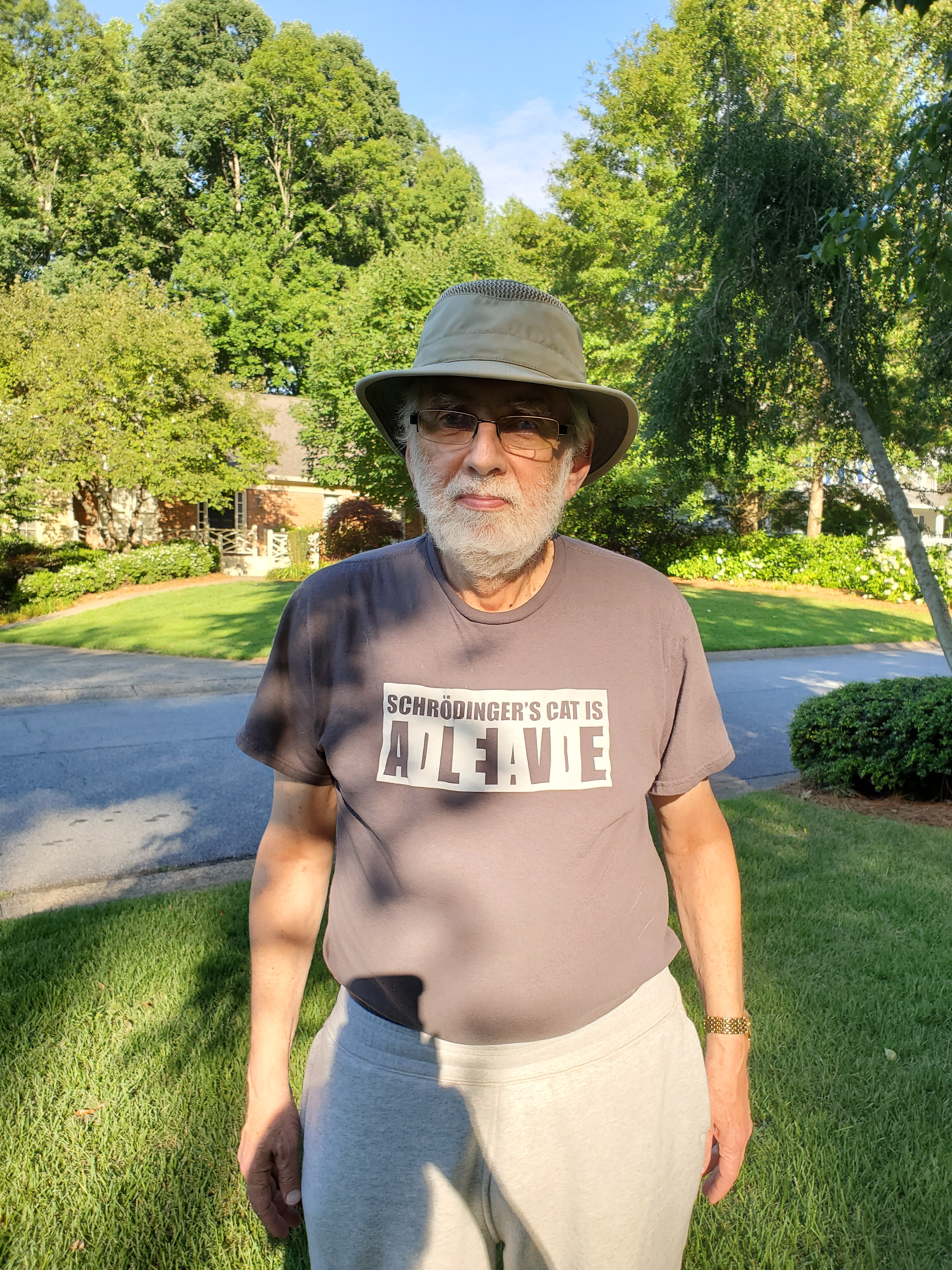 Doesn’t he look fine? Well, maybe not so much, but it is a great shirt.

He did want me to mention that he is feeling much better, and that he thanks all of you for your love and prayers.

Not too much is going on right now in Happy Meadows. People are still setting off fireworks, but that is bound to stop soon. I know the dogs will be happy about that. Until next time, from Happy Meadows, be well, and be safe. We love you all!