So, how about that Tiger Woods? I was home yesterday afternoon as he was coming up the 18th fairway. Michelle was there and she, Mike, Judy, and I were all watching the golf tournament. Usually a golf crowd is quiet and exhibits a certain amount of decorum. But not this one. It was like the running of the bulls in Pamplona. Pretty exciting stuff. The tragic hero redeemed, with new-found humility. Between his tomcat excesses and swinging too hard he had a great fall, but unlike that Humpty-Dumpty guy, he managed to put himself back together again (with, of course, the help of all the king’s horses and all the king’s men.) Good for him.

Now that the High Holidays are over, Mike’s life is getting back to normal. Between having had no food or water for almost 24 hours, and spending all day at temple on Yom Kippur, he was pretty exhausted. He did tell me it’s okay to tell you that he did have 2 cups of coffee Yom Kippur morning. He isn’t really that much of a rule follower. He says what he got out of the whole experience is that he does want to be the best person that he can be, which is what God wants for/from him. And that God will help him as much as Mike allows him to. Not that profound really, but from my perspective, pretty accurate. What comes naturally to a cat can take a lifetime for a person to figure out. And some people never get it. Mike gets a thought for the day on line from an AA-related website. It was either yesterday or today that the idea came across to try to see yourself as God sees you. I think it’s just another way of saying, be the best person you can be: humble, loving, lovable, compassionate, honest, selfless, true to whatever you believe in. Mike’s rabbi mentioned the story of Moses and the burning bush during one of his sermons on Yom Kippur. I think the key to that story has to do with Moses paying attention to what was going on around him in his life. According to the story what caught his attention is not that the bush was burning but that it wasn’t being consumed by the fire. Apparently, walking through the desert in Midian one encountered burning bushes all the time. I’m not so sure about that. Anyway, if he hadn’t stopped and looked more deeply he would have missed his encounter with God. So pay attention, y’all. I don’t think chances will come along in your life every day to have a life-changing encounter with God. Have any of you ever had a burning bush moment? If so, please write and tell me about it. I would like to learn about it, and might put it up on the blog.

So, things are progressing with the disposal of Judy’s parent’s house and belongings. I may have mentioned before, or possibly not, that there has been a potential conflict brewing. Back around 1980 her parents got a notion to go out and buy some beer. So they went out and got a six pack of bottles of Lite beer. They each had a beer, lost interest, and the four remaining bottles and little cardboard carrying case took up permanent residence in the back of their bedroom closet. They never threw anything away. Now, Judy has two brothers so there are only three heirs. Mike has always wondered how the three of them were going to divide four bottles of beer. Unfortunately, I don’t think there’s any value to the item at this point because the carton is torn open and  two bottles are missing. So it’s not like it could find its way into a museum. Almost everything is resolved in the estate now except for the division of the beer. The remaining four beers and the carton have taken up a new residence in our garage. I’m including a picture so that you’ll know I’m not making this all up. Any suggestions on how to divide four beers three ways will be welcomed. I don’t think anybody actually wants to drink this 40-year-old beer, but it’s more the idea of just having it. 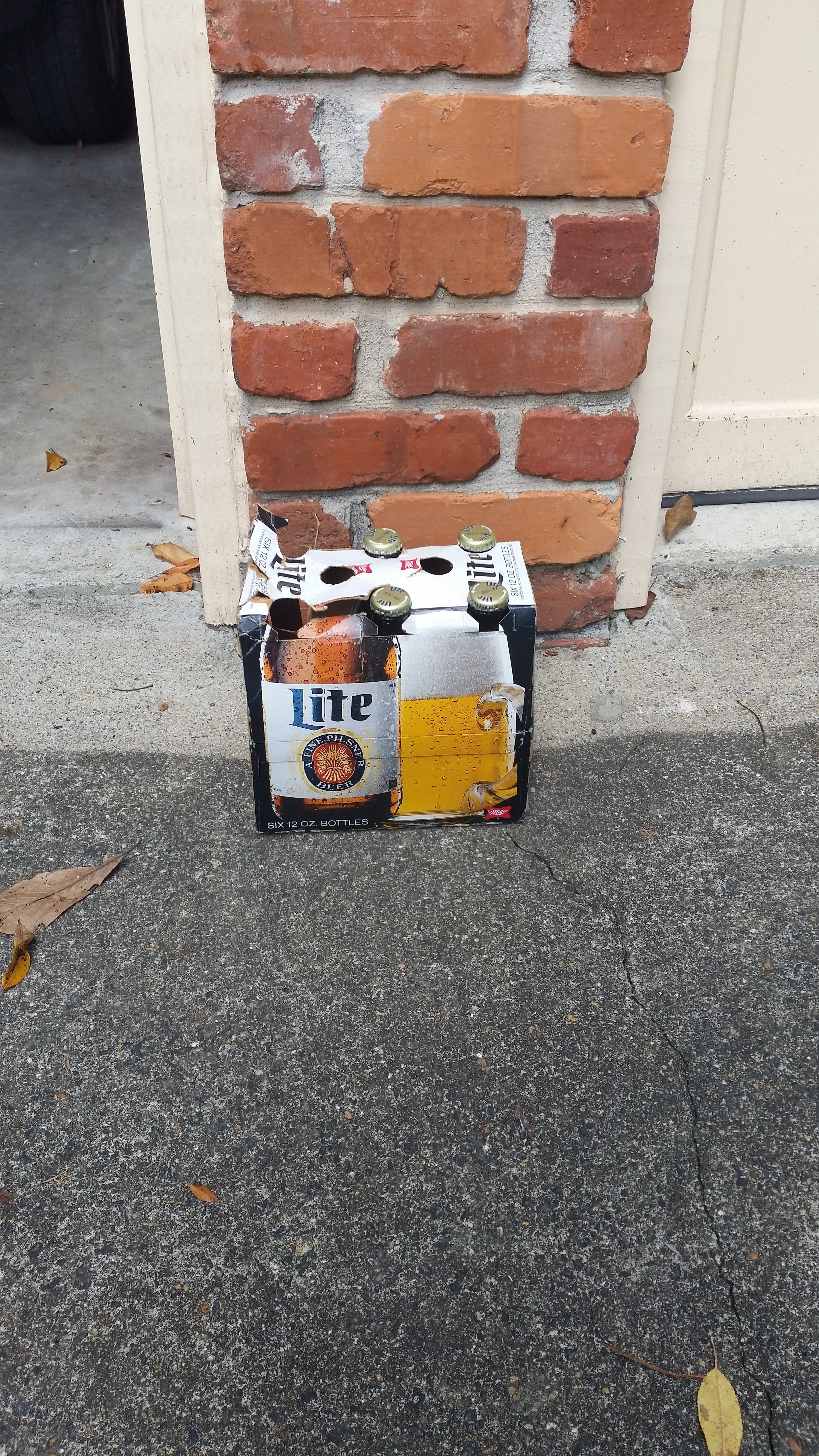 So, also yesterday, Mike got the bright idea to get out his pole saw and trim a branch of his Japanese magnolia that was encroaching on the roof. He didn’t think it would reach, but at full extension, he was able to reach the branch and saw about halfway through it. About that time the handle separated from the business end of the saw, leaving it, literally, up a tree. 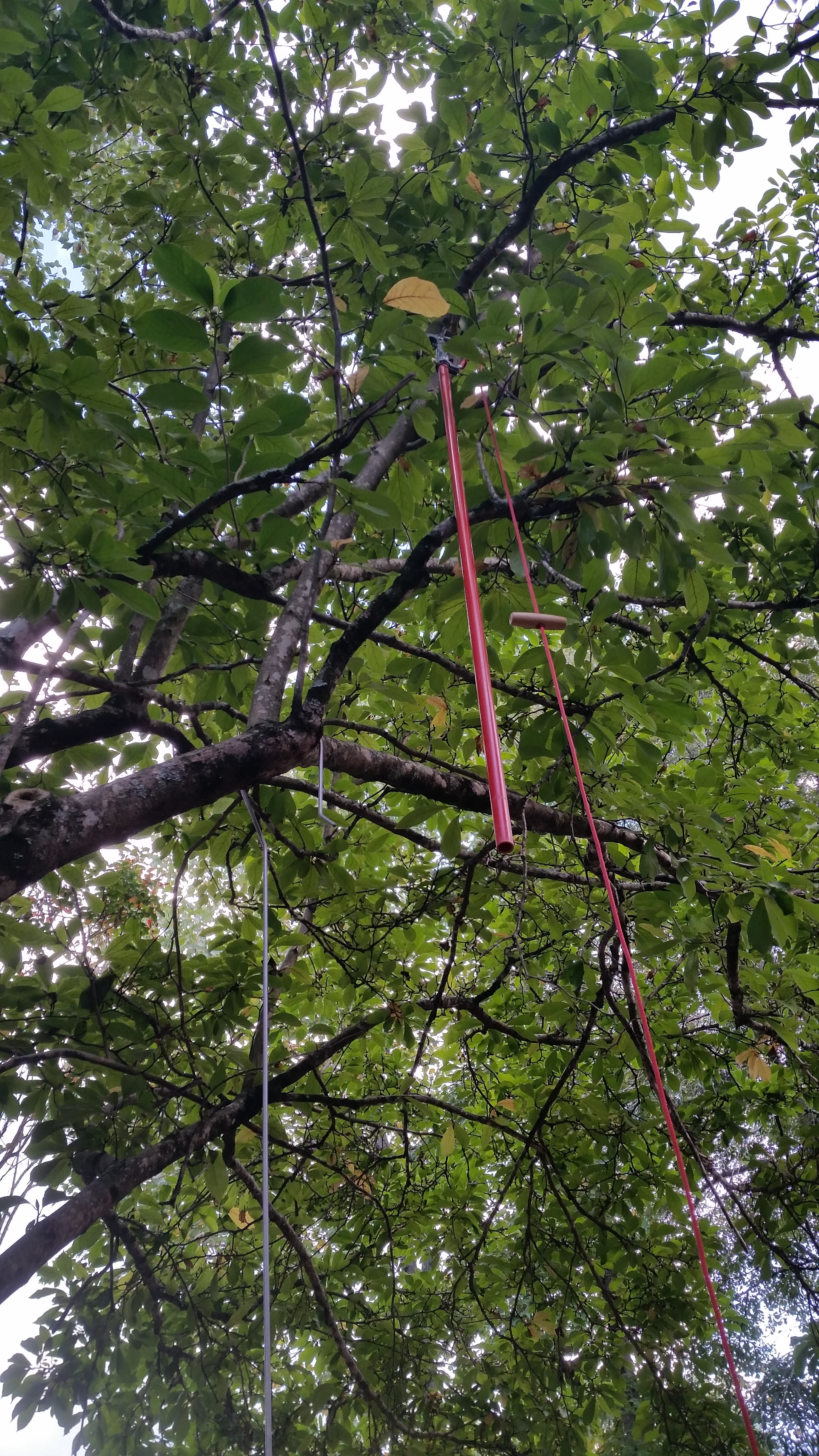 Strangely enough, Mike said nothing to Judy about any of this until Michelle came over to hang out. He enlisted her help, and they got out a step ladder which was entirely unsatisfactory. Mike was able to reach the saw, but couldn’t budge it. So they got out a bigger ladder (one that I had never seen before as it lives in the basement where I never go) and propped it against the tree which Mike could hold onto with one hand while he gripped the saw with the other, fruitlessly jerking it back and forth like a maniac. All this while Michelle is holding the ladder steady so Mike wouldn’t topple over. Mike admits he was thinking about all the patients he has seen who have ruined their lives falling off of ladders. But he would be more careful. Next he went into the garage and found a heavy hammer. He climbed back up the ladder and started whacking at the end of the saw handle, also like a maniac. I should mention that I was watching the operation from some small distance away, in consideration  of my own personal safety. All of a sudden with a mighty whack the saw and the tree branch both came tumbling down. It could have been ugly, but no one was hurt, no thanks to Mike.

In other news of significance, Judy brought home a small can of some different kind of cat food. I have told you before that Shayna Maidel will eat anything in a can with a picture of a cat on it. This particular product was tuna pate.  I won’t mention the brand name, but I will say that their commercials are immensely annoying and feature cats singing a meow song. But it isn’t really cats singing. Anyway, we all turned our noses up at it, that is, all of us but Shayna Maidel. Well, the next thing you know, she is hurling up a pool of liver colored liquid. It came up as fast as if she had just bolted down a centipede. Not the most pleasant story, but I just thought you should know. Luckily, she didn’t ruin the good carpet. Actually, we don’t have any good carpets. As Mike and Judy both say, you can have nice things or you can have cats, but not both. I’m glad their priorities are sound. Well, so long from Happy Meadows for now. Be safe, be well, love on your pets, and have a blessed and wonderful 5779.