So, it’s a beautiful day today in Marietta, Georgia. The morning was cool and lovely. I am starting to get a sense of an impending change of the season. To look around in my little world you would never know of the terrible flooding or fires that are going on in our country. Sometimes when I have nothing better to do I lie around and wonder whether it’s better to have too much water or not enough water. I don’t think there is an answer to this question. Nobody could live but a matter of days without water. And when there’s no rain everything gets dry and fires break out. Fires are dreadful. They kill and displace people and animals and leave ugly scars wherever they go. Too much water, on the other hand, is devastating. The flooding that is going on in Texas right now is beyond imagination. There’s so much displacement of people and destruction of property that the effect will last for years. The power of water can be devastating. I know that in the American Southwest certain rainstorms can cause flash flooding, walls of water crashing through canyons killing whatever or whoever happens to be in the way. I know a few years ago there was a terrible earthquake which triggered a tsunami that killed hundreds of thousands of people and destroyed so much property around the world. Floods have had such an impact throughout history that some of the oldest myths known are flood myths. One occurs in the epic tale of Gilgamesh and another occurs in the Bible. Water represents the power of God to either destroy  or to give life.

Tragedies such as floods and fires bring out the best and worst in people. These are definitely  times for people to reach out and help their neighbors. We do it as individuals and collectively as a society. We need to do everything we can to support the relief efforts and help the unfortunate people who lost everything. There is also an opportunity for people to rush in and take advantage of their neighbors, say, by charging them $100 for a bottle of drinking water. Mike heard an economist interviewed on a radio show who thought that this was a good thing. This demonstrates that if you start with an ideology that lacks compassion (such as total freedom of the marketplace) you can justify anything.

So, as deadly as water can be, there can be no life without it. When the scientists send probes to Mars or other heavenly bodies searching for signs of life the first thing they look for is evidence that there is, was, or could have been water present. If water was present, the likelihood of life having been present in some form increases dramatically. So, water must be a good thing, but I suppose too much of any good thing can be a bad thing. (Some rich skinny woman once said that you can’t be too thin or too rich, but she was definitely wrong on both counts. It’s another example of an ideology carried too far.) And lack of water leads to terrible suffering. We have a mechanism in our brains that senses when we need to drink water. It senses the amount of water and concentration of electrolytes in our bodies, and sends a “drink water” message to our conscious minds whenever necessary. It also sends an “enough water” message to our minds when we are adequately hydrated. (Overhydration can cause seizures and death.) The sensation to drink is called thirst. We apply the term to other sorts of deficiencies, for example, thirst for knowledge. (James B. Nelson has written a very good book about alcoholism and titled it “Thirst: God and the Alcoholic Experience.” You might enjoy it.) Thirst is a powerful biological drive, and for good reason. Anyone whose throat has become so dry that it hurts will know what I am talking about.

Since I started to write this piece a terrible hurricane (Irma) hit the Caribbean Islands, and Florida. The destruction of life and property in some regions was horrific. It looks like another hurricane (Maria) is on the way. Metaphorically speaking, when it rains, it pours.

Speaking of water, I once heard Mike talking about going to a performance of a musical play called “Water, Water” when he was an undergraduate student at the University of Illinois in Champaign-Urbana. He doesn’t recall any memorable tunes from “Water, Water”, but something about it stayed with him. The composer was Harry Partch, an interesting fellow who was a professor of music there at the time. Partch was an original thinker. He wanted to know why he had to use a musical scale based on an octave that was divided into 12 equally-spaced tones. He studied other musical systems, and eventually came up with an octave that was divided into 43 tones. Since there were no musical instruments in existence that were able to play these tones (he called them microtones) he invented some. Many of these were in use in the performance of “Water, Water” including one that was mounted on a bicycle. If you are interested you can go on-line and Google Harry Partch. There is an informative documentary on U-tube that will come up, and also pictures of his instruments. Many of them have been preserved and are maintained by the University of Washington in Seattle. If you are up that way maybe you could check them out.

I am so slow in getting this out, that we have had more tragedies in our world. A terrible earthquake has devastated the area around Mexico City. And hurricane Maria has hit Puerto Rico with unprecedented fury and destruction. Too much water, and way too much wind. Unbelievable. What are those poor people (and their pets) going to do? You can see where these ancient flood stories came from.

It is remarkable the many physical forms that water can assume. From tiny droplets to enormous waves; tiny ice crystals to giant glaciers. Snow, rain, hail, fog, crystal clear to opaque, colorless to white. Rock hard to soft as powder. Amazing stuff, and it has the wonderful capacity to take up material into itself. All kinds of salts can dissolve in water, as can many other substances. Even air can dissolve in water. I’m going on and on, but I find it interesting how I can take something as remarkable as water for granted most of the time.

Oh, and shouldn’t I mention that water is beautiful? Mike has talked about the first time he saw Niagara falls (it took his breath away, literally), and about the time he saw a giant yellow moon breaking the horizon one night over Lake Michigan. Mike took the picture below at the Atlanta Botanical Garden this summer. It is similar to thousands of beautiful pictures we have all seen. This one represents Mother Earth. Water does make the world green and lovely. The picture also illustrates another characteristic of water, which is that it is reflective. Think about that. 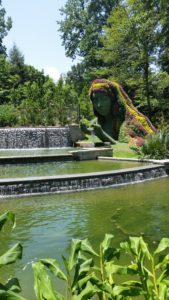 Water has always represented spirituality to people. To Christians, the ritual of baptism, which involves either having water poured over the person, or total immersion into water, is a necessary prerequisite for salvation. The Hindus have seven sacred rivers (I think there are 7). Observant Jews utilize a ritual bath (mikve) for various spiritual purposes. Roman Catholics have used holy water in their rituals for over 1000 years. In the  book of Amos there is a famous and beautifully poetic line, “But let judgment roll down like waters, and righteousness as a mighty stream.” The reference here seems to be that water will let nothing stand in its way, although one can dig in and get a lot more out of it than just this one idea. I’m sure that the capacity of water to cleanse has a lot to do with its symbolic capacity to transform the ordinary into the pure and the sacred. If you are interested you might want to go the “The Water Page” at www.africanwater.org/religion.htm for more information.

If you want to read an interesting book, check out “The Color of Water: A Black Man’s Tribute to His White Mother” by James McBride. What I got out of it was how much courage people can find within themselves, and how much respect people can earn from and show to others.  We need more of this in our angry and troubled world. His water reference is, of course, to the fact that that water has no color. Color is a difference in people, and cats, that we all need to look past. I can appreciate and enjoy everyone’s uniqueness, but it is best to not judge others on their superficial characteristics. I am black, which is fine, but please relate to my inner cat, and I will relate to yours.

I don’t even know how I got started on this. sometimes I just write about whatever enters my mind. We need to get back to what is going on in Happy Meadows next time. Happy Autumn!