So, Mike woke up a couple of mornings ago with the word “nibbinubs” in his head. He told Judy that he didn’t remember his dream but he had the feeling that the word referred to a brand of cat food that he had been dreaming about. Is that weird or what? Now, it’s hard to say why Mike would be dreaming about cat food, but as I admire all things cat, I’m generally in favor of him having such a dream.The word reminded Mike of “yipiyuk”, a little creature in a poem written by Shel Silverstein, a creature who “would not let go.” So this brought to mind  Shel Silverstein and his book, “Where the Sidewalk Ends.” Mike, Gena (Mike’s late wife),and Michelle had taken a weekend trip down to Chicago from their home in Madison, Wisconsin. Mike had just picked up the book and sat down in the hotel room with Michelle on his lap and started reading to her. Michelle was 4 years old at the time. She wouldn’t let him stop reading until he finished the entire book. This is one of Mike’s favorite lifetime memories, Michelle’s joy at those silly pictures and poems and sharing it all with her. Michelle still remembers this incident. Sadly, the book has disappeared, but since all this got stirred back up in Mike’s memory he went out with Judy and Michelle today and got another copy, the 40th year anniversary edition. The book was actually first published in 1974. Mike would never tell you what to do but I am going to encourage you to get a copy  and read it. You can read about Sarah Cynthia Sylvia Stout (who would not take the garbage out). You can read about Hector the Collector, the boa constrictor, and the invisible boy. All in all, thoroughly delightful. Don’t wait. I could go on and on about Shel Silverstein but I’ll leave it to your research to see about the other things he did with his life and delightful books that he wrote. Sadly he died too young. There seems to be a lot of that going around.

So, Mike got a blast from the past the same day, a phone call from Gena’s cousin Brenda. It was great to hear from her after over 20 years of no contact. People seem to drift apart for no particular reason, or at least for no reason that’s good enough. We did  a lot of catching up over the phone and hopefully we’ll get together this summer. It was a joy for him to hear from her.

More about Mike. I wandered into the bathroom the other day when he was struggling to trim his toenails. He can barely reach his feet anymore. It is pathetic. If this gets any worse Judy is going to have to take him to the vet to get his nails trimmed…….. you know, the Extreme Vet at Happy Meadows Veterinary Clinic. I’ve talked about this outfit before. You get brought over there for some lame reason, and the next thing you know they are poking and prodding you in every orifice. I told you about the time I was at the shelter when the vet showed up, and the next thing I knew I had taken a nap and I woke up tutored.  I never seemed to want to date after that. I had told you in my post entitled “So, I suppose I should introduce myself a little more”  dated December 4, 2016 about this episode, and said that if anybody suggests that you be tutored I would advise against it. I have not changed my mind. Be careful.

Oh, and check this out! Sometimes Mike takes me out for a ride in his hamstermobile for reasons other than going to the Extreme Vet. I recently noticed that across the street from the clinic there is a specialist who does nothing but tutoring. I got Mike to take a picture. Here it is. 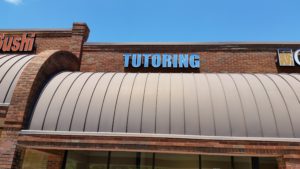 I would advise you to stay away from this place. However, the place next door is another story altogether. If only they had mice on the menu it would be absolutely divine. You should try it sometime.